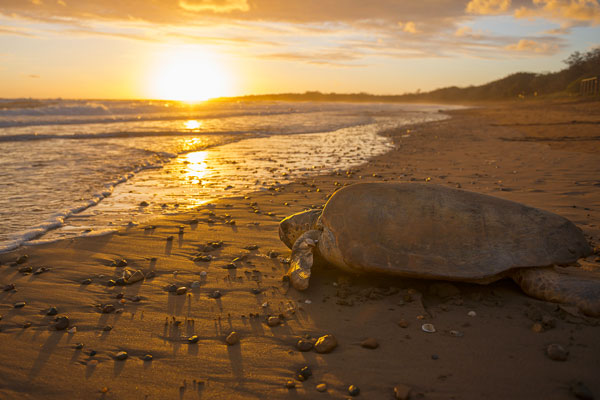 “Conserving the largest turtle rookery in the South Pacific also protects a significant ecotourism destination, which is very important for the local economy,” Mr Dick said.

“Urban development, particularly artificial lighting, has had a substantial impact on all turtle species.

“Artificial lighting can leave turtles disoriented, leading them towards dangerous roads and predators rather than their natural path to the ocean.

“Turtle hatchlings have a very low survival rate as it is, with only one in 100 reaching maturity, so it is critical we reduce this kind of human interference.”

Minister for Environment Leeanne Enoch said Mon Repos had the most significant loggerhead nesting population in the South Pacific region.

“The success of nesting and hatching turtles is critical for the survival of the endangered loggerhead turtle, which is why it is important to put protections in place for these beautiful creatures,” Ms Enoch said.

Ms Enoch said the Queensland Government had committed more than $16 million in funding to redevelop the Mon Repos Turtle Centre, strengthening the park as a year-round tourist destination.

“Earlier this year the Palaszczuk Government committed to an extra $3.75 million funding to strengthen the position of Mon Repos Conservation Park. This was on top of our $12.4 million first stage commitment to redevelop the existing Turtle Centre.”

“This partnership between Council and the State Government in extending the TLPI is great news for our turtles,” Mr Dempsey said.

“The scheme amendment is anticipated to facilitate future residential development within the Burnett Heads area, while including additional provisions to provide protection for Mon Repos Regional Park,” Mr Dick said.

“Both department and council have been proactively working with a range of other stakeholders through the Mon Repos Technical Working Group to help address long-term planning solutions to the impacts on turtle breeding at the Mon Repos Regional Park.”

The Queensland Government has committed more than $16 million in funding to redevelop the Mon Repos Turtle Centre, strengthening the park as a year-round tourist destination.

On Good Friday, dozens of motorists were caught out by a monster high tide and drove up onto the sand dunes at Teewah Beach at Double Point Island to avoid being washed away.

The problem is, the dunes are homes to turtle nests and residents are furious that delicate loggerhead turtle nests might have been crushed.

Social media went viral on the weekend after photos of congregating campers were posted with local residents expressing outrage that visitors to our region should act in such a cavalier way in their heavy vehicles.