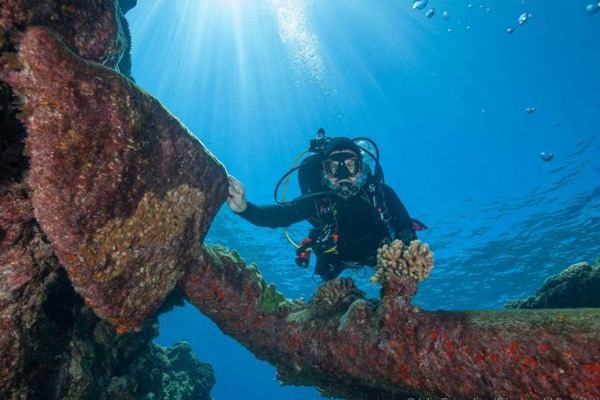 A team of researchers from the Australian National Maritime Museum and the Silentworld Foundation have discovered three shipwrecks in the Coral Sea.

The wrecks, estimated to be at least 150 years old, were discovered during a week-long expedition to Kenn Reefs, 520 kilometres north-east of Bundaberg.

James Hunter is the curator of maritime archaeology at Sydney’s Australian National Maritime Museum, and was one of 11 people who undertook the expedition.

“To look down at the seabed and to see an anchor sitting [there] and to see something someone hasn’t seen probably since that shipwreck occurred, it’s magic, it’s an amazing thing,” Dr Hunter said.

The Kenn Reefs are a 42-square-kilometre string of submerged coral atolls located about half way between the Queensland coast and New Caledonia.

The reefs were notorious among 19th century sailors; a previous expedition undertaken by the Queensland Museum in 1987 found nine other wrecks in the same area.

A map printed in 1859 even describes the southern end of the reef as being “strewed with wrecks”.

“During the 19th century [Kenn Reefs] weren’t very well charted and people were out sailing, and depending on the conditions, would end up running into them,” Dr Hunter said.

“In some instances [sailors] never even saw them before it was almost too late.”

Most of the shipwrecks found along the reef are from 19th century trading vessels on their way north to Jakarta, India and as far away as England.