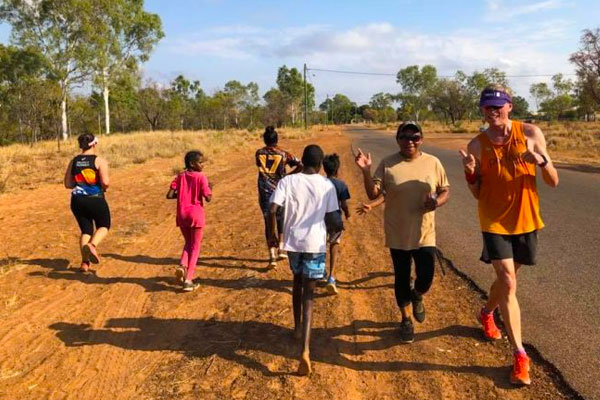 A community running event that started in the United Kingdom in 2004 and has now spread across 20 countries launched in a remote Queensland town on Saturday.

Doomadgee parkrun is the first in the world to be held in an Indigenous community and is also the most remote, according to parkrun Australia.

Delighted organisers are calling it a “deadly” turnout, with 43 people completing the five kilometre course.

And in the tradition of ‘parkrun tourism’, international runners from as far away as England and Borneo were there too.

Doomadgee, one of the 10 most disadvantaged communities in Australia, according to Australian Bureau of Statistics data, is 612 kilometres north of Mount Isa.

It has a population of about 1,400, with a median age of 21 and a large majority of residents younger than 14 years.

Sharing the fun of running

The concept behind parkrun (stylised with a small ‘p’) is to encourage people to run, jog or walk, and volunteer, on Saturday or Sunday mornings, somewhere in the world.

It is entirely free and all that is required is to register online with parkrun, which has almost 4.5 million runners signed up internationally.

Co-director Melissa Gilbert, a Queensland police officer from the Gold Coast, was an active runner herself before being posted to Doomadgee in early December.

“I was missing the fact I wasn’t going to be able to do parkrun every week and I wanted to share the fun of it with the [town’s] people, so I started getting everything organised to start one there,” she said.