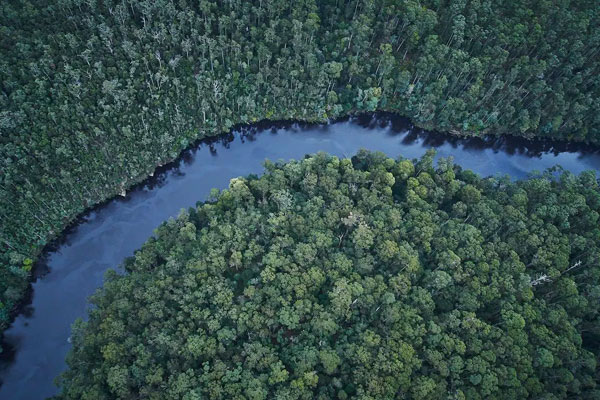 With Bob Brown and Rick Ridgeway

As part of our* focus on World Heritage protection for takayna, the Tarkine rainforest under threat in North-West Tasmania, our writer Ruby had the chance to interview two incredible supporters of the campaign. Time to get inspired, courtesy of Bob Brown and Rick Ridgeway. (*We are Explorers)

I ride the elevator in Fraiser Suites, Sydney with Dr Bob Brown and Rick Ridgeway to the second floor, where we take a seat in the golden glow of an empty restaurant. I have never conducted an interview like this before and I’m nervous. I look up at their kind faces and down at my pad of scribbled, nonsensical questions. My motorbike helmet is resting on the floor and my windswept hair does a good job of hiding my anxious tics.

Who Are These Men?

Dr Bob Brown served as the Parliamentary leader of the Greens for 20 years. Previously, he had spent 7 years campaigning to save the Franklin River in Tasmania and, while protesting, was one of the 1500 arrested, spending 19 long days in prison. On the day of his release, he was elected to Parliament. The Franklin River was saved.

While his unwavering commitment to the protection of earth on both political and community stages is something to be admired, he’s also a trained medical doctor and was the first openly gay politician in all of Australia’s history. If you’ve watched Hannah Gadsby’s “Nanette” recently, you’ll know that homosexuality was a punishable offence in Tasmania until 1997(!). Bob was certainly deep in politics at this point.

Rick Ridgeway is Patagonia’s Vice President of Public Engagement, but his career title is no match to his extensive mountaineering escapades. Rick was the first American to summit K2, the world’s hardest high-altitude climb and the second highest peak. In the 80s, Rick joined the original Seven Summits expeditions and was the first person to make the coast-to-coast traverse of Borneo. He’s an active conservationist who has dedicated most of this life to writing books and making films about the wild regions that are disappearing at the hand of humanity’s quest for progress. He was the founding chairman of the Sustainable Apparel Coalition, which has now grown to 90 companies, representing over 30% of global footwear and apparel production.

Knowing this and more about Rick and Bob made me nervous — I expected hard, straight-down-the-line kind of characters, worn with the weathering of politics and campaigning. However, here before me sat two great-uncles with wisdom in their eyes. If only there were damper, tea, and a little warm fire.

I open the conversation with music, with the sounds and songs we listen to when we’re out in nature, on top of a mountain or sheltered beneath a cave. What ensues is 15 minutes of conversation between Rick and Bob about bird calls.

Rick: “Through my life I’ve tried to learn to increasingly pay attention, to use all my senses. It’s a hard thing to learn how to do. It’s a discipline that you can never get good enough at. You think you’re kind of getting there, and then you listen a little more intensely only to find there is more that you’ve missed. It’s the sound of birds that actually got me started on a lifelong commitment to paying more attention.”

Bob: “There’s a lot of contention about whether our music comes from the birds. The songbirds of the world came out of Australia and spread to the rest of the planet. Wherever you are in Australia you hear these birds talking to each other and setting their territories. It’s endlessly fascinating to me. In Tasmania, there’s the screech of the peregrine falcon – they fly very fast, they’re the fastest bird on Earth! Or the call of the great yellow-tail black cockatoo… EEERA, EEERA! Albums come and go, but birds are a constant.”

In the echo of the second floor, Bob’s “EEERA” disrupts the murmur of voices. It seems out of place in this concrete jungle. After a short pause, the city keeps moving, and Rick picks up the conversation about diving hummingbirds and their “whoop noise” mating calls. He’d hear them from his studio apartment in southern California as a young boy, and realised that those mating calls were happening all around him, constantly. “That was my first understanding of what awareness is really like. I’ve been a committed listener since then”.

Readers, we’re standing on the shoulders of environmental conservationist giants like Bob Brown and Rick Ridgeway. Now it’s our turn to provide strong shoulders for future generations to climb onto.

“Everyone in our democracy has a very powerful role to play. Think laterally about the way you can help.” (Dr. Bob Brown)

Source
We are Explorers