Nature’s Perfect Match is Breaking Down 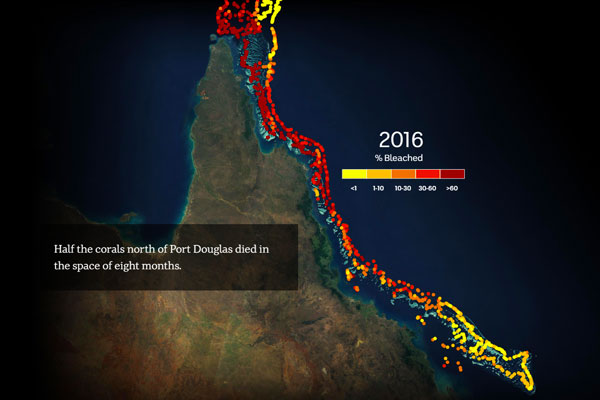 Nature’s Perfect Match is Breaking Down

Peel back the veneer and nature is a teeming war zone of many flashpoints. Species compete with their own kind and others for limited resources. In a dog-eat-dog world built upon Darwinian principles and food chain hierarchies, only the fittest survive — and the winners take all.

But oases of harmony do exist, where evolution has played matchmaker and engineered pockets of peaceful coexistence. Take, for instance, a relationship formed more than 210 million years ago around the time dinosaurs first appeared on earth.

Until recently, this remarkable and visually brilliant partnership was still going gangbusters.

Although Marine scientist Charlie Veron insists he’s a realist, his views lean towards the pessimistic end of the spectrum.

“I see what lies ahead and I’m terrified of it. I’m terrified for my family, my children, and I’m doing all I can to buffer my family against what’s coming,” the marine scientist said.

Veron, who became a coral expert by accident after he fell in love with the intensity of life he found under water, has now quit his research into corals to become a full-time, self-appointed advocate.

When climate change was first mooted in the 1980s, Veron was highly sceptical, recalling his first exposure to the polarising debate about the world’s changing weather patterns.

But rather than dismiss it as bunkum, Veron jumped into the academic literature and studied the data.

His epiphany was as sudden as it was shocking. “Oh my God, this is correct,” he recalls telling himself as he realised the consequences of rising carbon dioxide emissions.

Unchecked, these emissions would change the chemistry of the oceans — the “lungs of the Earth” — wiping out coral colonies and triggering an environmental chain reaction.

The result is a term that no one should use lightly: mass extinction. That would be the Earth’s sixth in the past 500 million years, but the first since humans arrived.

“That will be the end of humanity.”

Veron is not a climate scientist and it’s fair to say that his views are not universally endorsed by his peers. But his conviction is absolute.

The scenario he described is not hypothetical, he insists. There’s precedence. When ocean habitats have collapsed in the past, they’ve “stayed collapsed for millions of years”.