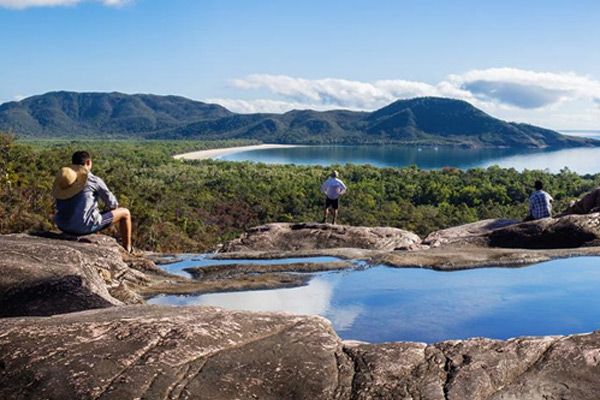 World heritage areas could be leased for 60 years under a State Government proposal to allow private companies to commercialise and build accommodation in three Queensland national parks.

But environmentalists are “absolutely appalled” by the plan, with some vowing to fight commercialisation of Hinchinbrook Island in Queensland’s north.

The site is the largest island national park in Australia and is located within the world heritage-listed Great Barrier Reef Marine Park.

One of the proposed developments is on the renowned Thorsborne Trail, which snakes 32 kilometres along the east coast of Hinchinbrook Island and is regarded as a prominent wilderness walk.

With limited facilities, hikers camp and carry their own supplies on the Thorsborne Trail.

The Department of Parks and Wildlife only permits 40 campers overnight at a time because of the trail’s ecological significance.

However, tender documents show the Government would entertain proposals to modify that restriction.

The Queensland Government has recently opened expressions of interest for private businesses to build accommodation at three sites along the trail.

Marketed as “eco-accommodation”, this could include cabins, retreats, huts or glamping.

In principle, QORF supports investment that will increase access to Queensland’s outdoors. We advocate for appropriate outdoor activities in appropriate places, but the debate here seems to centre around what is considered appropriate for tourism operators in these special places.”

The matter has come to a head with the death of conservationist Margaret Thorsborne AO, who dedicated her life to defending the environment and wildlife on island.

The trail is named after her late husband Arthur.

This week, as family and friends gathered for Mrs Thorsborne’s funeral, many voiced their anger at the Government’s plans.

The Thorsborne family, conservationists and traditional owners have vowed to fight commercialisation of the trail in memory of the couple who dedicated their lives to conserve it.

Mrs Thorsborne’s nephew John Thorsborne said she had “moved heaven and Earth” for six decades to preserve Hinchinbrook Island as a wilderness.

He said she would be “absolutely appalled” that private enterprise would be operating within national parks.

The island already has a failed private resort on a long-term lease sitting in ruins.

Hinchinbrook Island traditional owner Abe Muriata said he was opposed to the lease and did not think the proposal would be supported by the local Aboriginal corporation.

“Go away, and leave it alone. More people will come when it is left the way is it, pristine,” he said.

Three national parks up for development