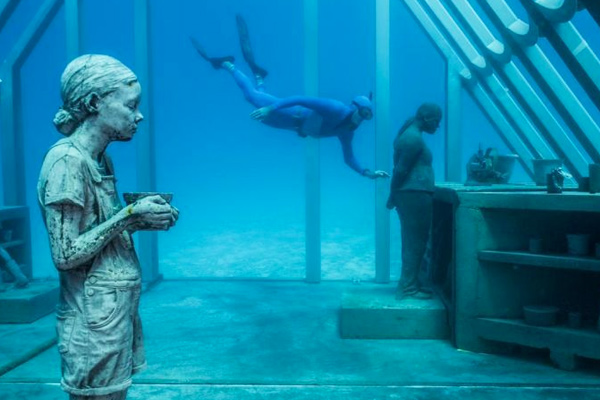 Year 6 student Takoda Johnson is pretty chuffed to be the inspiration for a sculpture at the Townsville Strand, which is part of the Southern Hemisphere’s first Museum of Underwater Art (MOUA).

Stage one of the project is now complete, with the installation of a dive site off the north Queensland coast.

The “coral greenhouse” features more than 20 marine sculptures made from stainless steel and marine-grade cement at John Brewer Reef.

“It’s submerged at around 18 metres deep, it rises up to nine-and-a-half metres high and it weighs over 160 tonnes,” he said.

“It’s comprised of a building that’s populated by about 20 sculptures and each of them are doing different activities in their underwater botanical space.

“Instead of having tomatoes and beans and different plants, we are actually going to substitute them for different marine organisms.

“We’re having corals, sponges, and obviously the resident fish population will move in pretty soon.”