From Nazi Germany to Australia 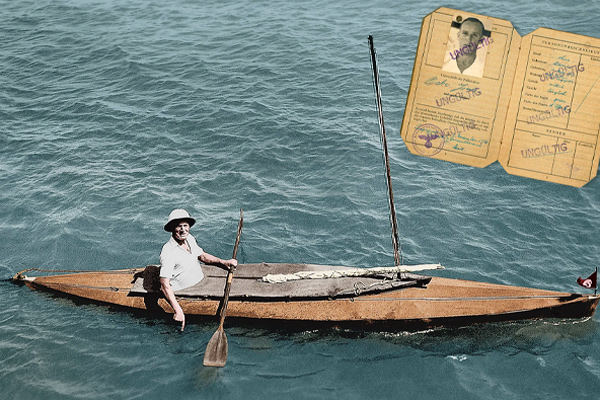 From Nazi Germany to Australia

With Germany in tatters, his small business bankrupt, Oskar Speck got into his kayak in 1932 for what would become an epic, seven-and-a-half-year paddle—30,000 miles, packed with hero’s welcomes and near-death escapes, all the way to Australia. But as Speck battled sharks, hostile locals, and malaria, Hitler rose to power and W.W. II began. This is the story of Speck’s voyage, an adventure nearly lost to history.

Sheets of monsoon rains, pushed by southeasterlies running to 25 knots, forced Oskar Speck and his 18-foot folding kayak off the open water into the protection of the mangrove forests of New Guinea.

It was the second piece of bad news for Speck on this day in September 1939. Earlier, in the primitive village of Daru, where the natives dried crocodile hides to eke out a living, a fisherman had given him a report from the far side of the world: war had been declared in Europe.

Steering alone into the sheltered waters of the coastal swamps, Speck had kayaked 30,000 miles on a trip that began seven and a half years earlier on the Danube River in Germany. It was the longest kayak trip in history.

When Oskar Speck set out from his ruined country in 1932, Germany had only a small army and Adolf Hitler had not come to power. Now Hitler’s Panzer divisions had stormed into Poland in a lightning strike that began the Second World War. The invasion had finally provoked Great Britain into declaring war and Australia had immediately followed suit.

So Speck’s grand triumph would not end the way he had dreamed—in Australia, “garlanded and carried in procession.” No longer an adventurer ending one of the most daring exploits of his time, Speck had become an enemy approaching hostile shores.

Speck came ashore at high tide. One of his many sailing pennants flew from the bow—his country’s new national flag, a swastika, the gift of Herr Trautmann. Only a boy, Sageri was frightened. He had never seen a white man come across the water. It didn’t make him feel more secure that the white man didn’t appear frightened at all. Forty or 50 silent Melanesian natives watched him approach. So did three more conspicuous men—Australian policemen in long, red-striped pants pressed to a razor edge, starched shirts, and bush hats pinned up on one side. They strode forward to shake his hand. “Congratulations on an incredible achievement, Herr Speck,” one said. “I regret to inform you that you are under arrest.

For the next six years, Oskar Speck disappeared into the oblivion of Australian internment camps, a woeful end to one of the most remarkable adventures ever undertaken. 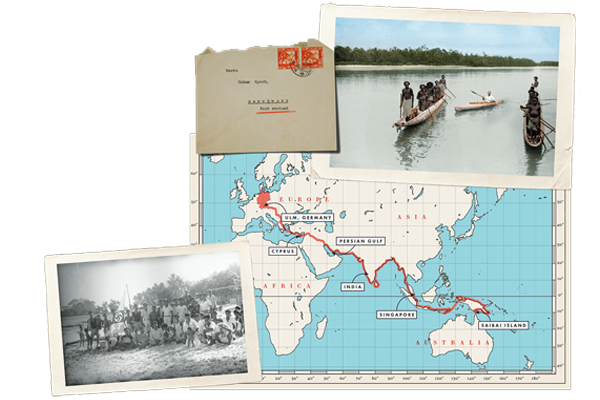 Oskar Walter Speck died in 1995 at 88, never able to get his full story told. The Australian Maritime Museum, recipient of a hodgepodge bequeathal of his diaries, documents, letters, passports, and yellowed newspaper clippings, undertook the marathon effort to piece his story back together. Curators searched out old friends and relatives and translated documents from a babble of languages. 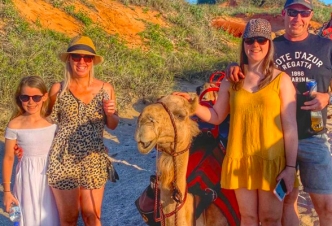