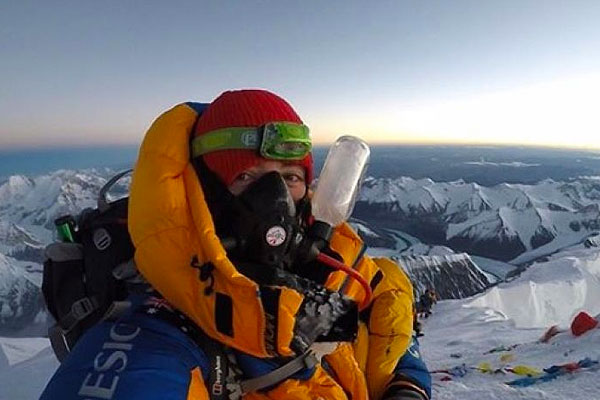 Alyssa Azar from Toowoomba on Queensland’s Darling Downs has become the youngest Australian to climb Mount Everest from both the north and south routes, and says she is relieved to have come home without frostbite.

Her family said the 21-year-old snagged the record with her second successful climb of the mountain a fortnight ago, arriving home in Brisbane on Saturday night.

“There is a lot of training that goes into it from the time you set the goal and I think for at least a year straight this expedition was my total focus,” Ms Azar said.

“It has been pretty amazing to finally get there and now to be home having done it.”

Ms Azar was the youngest person to cross the Kokoda Track as an eight-year-old in 2005 and the youngest Australian to summit Mount Everest two years ago.

She climbed this time with a small team of two French men and three Sherpas.

“Both myself and one of the French climbers had summitted Everest before and so we worked really well together,” she said.

“The altitude wears your body down over that two-month period but I was really happy with how my body performed at that altitude.

“There were definitely points along the route that I was tested mentally which I expected.

“It’s just about working through it when you do hit the wall mentally.”

Ms Azar said she believed youth was on her side.

“I think it does help you recover more quickly and just being able to focus solely on one particular goal is helpful as well,” she said.

One of her big reliefs was not getting frostbite.

“I was concerned about that as we had really high winds on summit night, and it was quite cold, but all good — no frost bite,” she said.